The other day I was working on one of those two column layouts. I quickly got into trouble by something I thought was a bug. It was a bug, but not in the browser(s) I thought. Let's go.

A two column layout I said, but this one was a bit different. Each column consisted of a number of boxes, much like a newspaper kind of layout. I wanted the boxes ordered a bit different though: Content editors on the site ordered articles by importance in a single list and when that was transferred to a two column layout I wanted the second most important article to the right of the first article rather than below it. In the HTML source the boxes were ordered like the editors wanted and my job was to make them display in two columns. 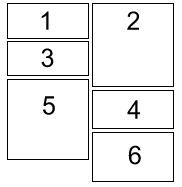 So, where does the gap come from? I went looking in the CSS specification on float positioning and found an interesting list of the rules that govern floats. As with almost all specifications they are not meant to be easy to read, so made a version of them where I use some sample code to explain each of the rules.

This is the sample code you need to have in mind:

The tricky one here is rule 5. It means that if #child was moved down for some reason, #child2 will have to move down too. Check the example again. See the space above box5 and compare it to the top of box4. Box5 can't be above box4 according to rule 5 above. This is clearly what's going on here. If we made box2 smaller than box1 there would be a space above it by the same reason.

I hope this gave you an "Aha!" feeling, it certainly gave me.